"The actions we're taking are swift and strong, and we will take further action as the facts adduced in the investigation compel." 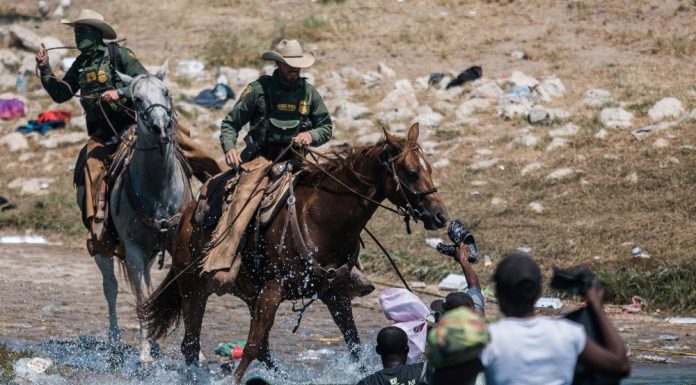 (Associated Press) The White House is facing sharp condemnation from Democrats for its handling of the influx of Haitian migrants at the U.S. southern border, after images of U.S. Border Patrol agents on horseback using aggressive tactics went viral this week.

Striking video of agents maneuvering their horses to forcibly block and move migrants attempting to cross the border has sparked resounding criticism from Democrats on Capitol Hill, who are calling on the Biden administration to end its use of a pandemic-era authority to deport migrants without giving them an opportunity to seek asylum in the United States.

Senate Majority Leader Chuck Schumer, D-N.Y., an administration ally, said images of the treatment of the migrants “turn your stomach” and called on the administration to discontinue the policies of Biden’s predecessor, Donald Trump.

“The policies that are being enacted now — and the horrible treatment of these innocent people who have come to the border — must stop immediately,” Schumer told the Senate on Tuesday.

At the same time, the administration continues to face attacks from Republicans, who say Biden isn’t doing enough to deal with the crisis at the border.

Reflecting the urgency of the political problem for the administration, Homeland Security chief Alejandro Mayorkas said Tuesday the images “horrified” him, a seeming shift in tone from a day earlier, when he and others were more sanguine about the situation at the border.

Mayorkas announced later that the agents involved have been placed on administrative duties pending the outcome of an investigation. “The actions we’re taking are swift and strong, and we will take further action as the facts adduced in the investigation compel,” he said on Twitter.

That dismay was misplaced, though, as a fact check showed the apparent whips are actually horse reins.

It’s a highly uncomfortable position for the administration, led by a president who has set himself up as a tonic for the harshness of his predecessor. But immigration is a complex issue, one no administration has been able to fix in decades. And Biden is trapped between conflicting interests of broadcasting compassion while dealing with throngs of migrants coming to the country — illegally — seeking a better life.

The provision in question, known as Title 42, was put in place by the Trump administration in March 2020 to prevent the spread of the coronavirus. But the Biden administration has used Title 42 to justify the deportation of Haitian migrants who in recent days have set up an encampment in and around the small city of Del Rio, Texas. The provision gives federal health officials powers during a pandemic to take extraordinary measures to limit transmission of an infectious disease.

A federal judge late last week ruled the regulation was improper and gave the government two weeks before its use was to be halted, but the Biden administration on Monday appealed the decision.

“The Biden administration pushing back on this stay of expulsions is another example of broken promises to treat migrants with respect and humanity when they reach our borders to exercise their fundamental right to asylum,” said Karla Marisol Vargas, senior attorney with the Texas Civil Rights Project and co-counsel on the litigation.Shortly after the judge’s decision on Friday, Homeland Security officials formed a plan to begin immediately turning the groups of Haitian migrants around, working against the clock. But people kept coming.

Trump essentially put a chokehold on immigration. He decreased the number of refugees admitted to a record low, made major changes to policy and essentially shut down asylum.

Biden has undone many of the Trump-era policies, but since his inauguration, the U.S. has seen a dramatic spike in the number of people encountered by border officials. The Haitian migrants are the latest example.

More than 6,000 Haitians and other migrants have been removed from the encampment in Del Rio, and Mayorkas predicted a “dramatic change” in the number of migrants there within the next two to four days as the administration continues the removal process.

As the controversy swirled around him, Biden spent his Tuesday address at the U.N. General Assembly in New York calling for the global community to come together to defend human rights and combat injustice worldwide, declaring, “the future will belong to those who embrace human dignity, not trample it.”

The remarks stood in notable contrast to images of the Border Patrol agents on horseback. Biden himself seemed to acknowledge the challenge his administration faces with immigration, offering a clipped response when asked by a reporter after his U.N. remarks to offer his reaction to the images.

“We’ll get it under control,” he insisted.

Copyright 2022. No part of this site may be reproduced in whole or in part in any manner without the permission of the copyright owner. To inquire about licensing content, use the contact form at https://headlineusa.com/advertising.
Click Here To Comment
Facebook
Twitter
ReddIt
Email
Pinterest
Print
- Advertisement -
Previous articleBiden’s Economy is Worse than Global Economic Experts Expected
Next articleTrump Sues New York Times, His Niece for $100 Million Over ‘Personal Vendetta’ Against Him

DeSantis to Campaign For Trump-Endorsed Candidates in Swing States