Trump Compares COVID to Seasonal Flu, and Twitter Censors Him

'Are we going to close down our Country? No, we have learned to live with it...'

(Headline USA) Still sickened by COVID-19, President Donald Trump on Tuesday played down the disease that hospitalized him for three days.

He compared it anew to the seasonal flu, and was promptly censored by Twitter: 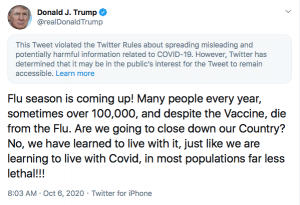 The president also signaled he plans to return soon to the campaign trail.

Trump’s doctors have not provided an update on his condition since Monday afternoon, shortly before his departure from Walter Reed National Military Medical Center.

On Tuesday, Trump also returned to his previous comparisons of COVID-19 to the seasonal flu.

“Many people every year, sometimes over 100,000, and despite the Vaccine, die from the Flu,” he tweeted. “Are we going to close down our Country? No, we have learned to live with it, just like we are learning to live with Covid, in most populations far less lethal!!!”

COVID-19 has shown to be mostly harmful among older populations, most with other problematic health conditions.

Democrat presidential nominee Joe Biden said he’d “listen to the science” ahead of the upcoming debates, adding that the campaigns and the debate commission should be “very cautious” in making plans.

“If scientists say that it’s safe, that distances are safe, then I think that’s fine,” he said. “I’ll do whatever the experts say.”

Copyright 2023. No part of this site may be reproduced in whole or in part in any manner without the permission of the copyright owner. To inquire about licensing content, use the contact form at https://headlineusa.com/advertising.
Click Here To Comment
Facebook
Twitter
ReddIt
Email
Pinterest
Print
- Advertisement -
Previous article
NC Dem Senate Candidate Cal Cunningham Now Accused of Having TWO Mistresses
Next article
Biden Refuses to Commit to Disclosing All Info About His Health If Elected
- Advertisement -

Zoomer Women on TikTok Talking Themselves Out of Having Children