'The events over the past week are an attempt to destroy my character and integrity...' 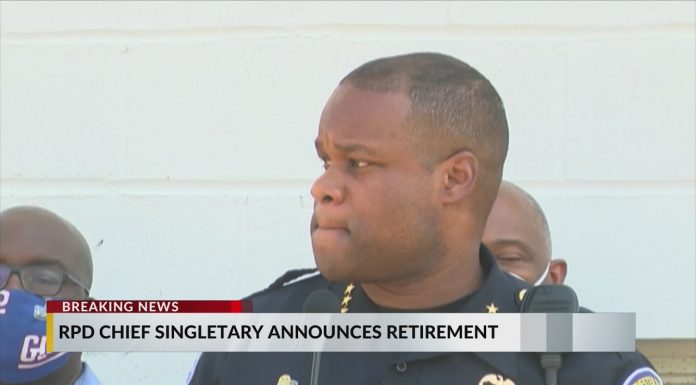 Rochester, New York’s police chief and two of his deputies resigned this week over the unfair treatment they’ve experienced from protesters and city officials in the wake of Daniel Prude’s death.

Rochester Police Chief La’Ron Singletary, who is African–American, explained during a press conference this week that he was resigning because his character was being maligned over the police department’s response to the death of Prude, who died in March after being restrained by police officers.

“The members of the Rochester Police Department and the Greater Rochester Community know my reputation and know what I stand for,” he continued. “The mischaracterization and the politicization of the actions that I took after being informed of Mr. Prude’s death is not based on facts, and is not what I stand for.”

Singletary’s departure is just the latest in a series of police chief resignations across the country.

Dallas Police Chief U. Renee Hall, who is also African–American, announced that she too would be stepping down amidst growing calls to reform the police department.

Hall did not offer a specific reason for why she was resigning, but Dallas Mayor Eric Johnson said her pending departure was not surprising.

President Donald Trump blasted the Democratic officials who are forcing these black law enforcement officers out.

Police Chief, and most of the police in Rochester, N.Y., have resigned. The Democrat Mayor and, of courses, Governor Cuomo, have no idea what to do. New York State is a mess – No Money, High Taxes & Crime, Everyone Fleeing. November 3rd. We can fix it!

(Headline USA) The Centers for Disease Control and Prevention issued a new eviction moratorium that would last until Oct. 3, as the Biden administration sought...
Read more
COURTS

(Headline USA) Voters in Seattle’s mayoral primary on Tuesday set up a choice between candidates representing activist-left residents and slightly less strident progressives, in one...

(Headline USA) Missouri Gov. Mike Parson announced Tuesday that he made good on his promise to pardon a couple who gained notoriety for pointing guns...

(Kerry McDonald, Foundation for Economic Education) On Monday, the Massachusetts Teachers Union unanimously voted to endorse mandatory mask-wearing for all students in preschool through college,...

DeSantis Shreds Victim-Shaming Reporter over Question about Kids in ICU

A reporter tried to bait Florida's Republican Gov. Ron DeSantis on Tuesday with a 'gotcha' question about a rise in hospitalizations for children as...

(Bruce Walker, The Center Square) Three members of Congress from Michigan are asking the Inspector General of the U.S. Department of Justice to conduct a...

Editor's Note: Story will continue to be updated throughout the day as additional details unfold. UPDATE 6:00 PM 8/3/21: After long maintaining his silence on...

Sen. Ron Johnson, R-Wisc., suggested this weekend that the FBI knew more about the planning of the Jan. 6 US Capitol uprising than it...