‘We should probably remove all Clinton files, folders, info off our servers etc. on an independent drive….’

The release of 422 pages of heavily redacted FBI materials, provided under the Freedom of Information Act, showed multiple references to cleaning up and deleting archives from the Clinton email accounts being hosted by Colorado-based Platte River Networks.

In an electronic correspondence dated Dec. 11, 2014, two company staffers appeared to joke about a “cover-up” while referencing the contents of a redacted message from a Chicago wealth management firm, Gresham Partners, LLC.

The message likely related to a change in Clinton’s e-mail retention policy.

“Its all part of the Hilary coverup operation,” it read, followed by a smiley face. “I’ll have to tell you about it at the party.”

It is unclear from the context what specific role Gresham played in managing the email servers. Other wealth-management companies also were involved in contracting with Platte River for the private server, including a New York-based tax attorney overseeing the Clinton Executive Services Corp.

The messages revealed a flurry of efforts, overseen by Hillary’s chief of staff, Cheryl Mills—along with the Clintons’ personal tech advisor and aide, Justin Cooper—to lock down access and “clean up” files in early March 2015, around the time that the news broke publicly of Clinton’s private server.

One March 5 email reads, “[Redacted] going to send over a list of recommendations for us to apply for additional security against hackers. He did say we should probably remove all Clinton files, folders, info off our servers etc. on an independent drive.”

Cooper, known to have played a pivotal role in setting up the server, appeared to be the only male staffer directly associated with the Clinton server at that time, according to Platte River’s Active User lists, which indicated someone with the name “Justin” was an admin for the server.

He was later revealed to have overseen the task of destroying Clinton’s cellular and Blackberry devices by smashing them with a hammer.

“I think it’s practical to not just throw an old device into a garbage receptacle where someone might pick it up and try to use it,” Cooper said in later testimony before Congress.

In addition to the emails, the Judicial Watch release includes handwritten FBI notes from a Feb. 18, 2016 interview with an unidentified staffer at Platte River, pertaining to the bureau’s “Midyear Exam” investigation into the emails.

Two of the company’s tech specialists, Paul Combetta and Bill Thornton, subsequently declined to appear during the Congressional hearings, instead pleading the Fifth Amendment against self-incrimination.

The FBI notes referenced the Dec. 11 email about the “Hillary cover up operation” and a work ticket that involved a cleanup of the server’s archive account.

The notes suggested the “cover up” remark likely was related to a change in the email retention policy, which Clinton’s staff directed be switched to 60 days. The tech worker being interviewed did not recall the previous policy.

The Platte River specialists also revealed they had given someone with the Clinton staff live access to the archive account, which was on the server as of January 2015 but seemed to have vanished at some point before the February 2016 interview. 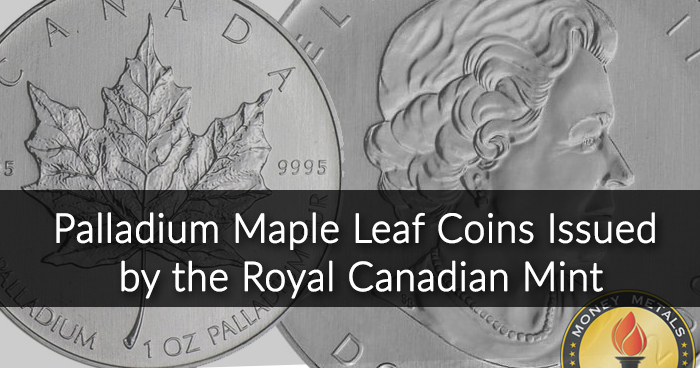 Investors can buy the Canadian Maple Leaf 1 Oz Palladium coin online or over the phone by calling Money Metals.

The March 2015 public revelations about the private server appeared to have triggered a cascade of mixed messages, with Clinton officials formally instructing the Platte River staff to preserve what was on the servers but advising them in a March 25 conference call not to answer questions in reference to a conversation with Clinton attorney David Kendall.

By August 2015, the pressure appeared to be mounting for Platte River to furnish the backups it had.

“So does this mean we don’t have offsite backups currently?” the staffers wrote. “That could be a problem if someone hacks this thing and jacks it up. We will have to be able to produce a copy of it somehow, or we’re in some deep shit.”

However, little remained on the servers themselves after a BleachBit program was used on March 31 to wipe them clean.

Clinton herself later claimed ignorance, responding to an August 2015 question about wiping the servers by saying, “What, like with a cloth or something?”

Mills, who appeared to have directly overseen much of the “cleanup” was not only present for Hillary Clinton’s deposition during the FBI investigation, but was given immunity from prosecution.

That decision widely questioned and criticized as attention turned more to scrutinizing the cover-up efforts within the FBI itself.

Judicial Watch has led the charge in investigating Clinton’s role in Benghazi and in the email scandal, with several previous document releases available on its website.

The new release helped to “further demonstrate the sham nature of the FBI/DOJ ‘investigation’ of her,” said Judicial Watch President Tom Fitton in a statement.

“These shocking new documents show that various Obama agencies were protecting Hillary Clinton from the consequences of her misconduct. It is well past time for the DOJ to stop shielding Hillary Clinton and hold her fully accountable to the rule of law.”

Following a court order that allowed discovery to include depositions of key figures, Judicial Watch has been in the process of interviewing both Clinton staffers and other officials within the Obama administration on the government role in helping cover up potentially criminal activity.

Rep. Devin Nunes, R-Calif., the former chairman of the House Intelligence Committee also announced this week that he had recommended eight people to the office of Attorney General William Barr for possible prosecution related to the cover-up efforts of the FBI and other intelligence agencies that were investigating Clinton.

Copyright 2022. No part of this site may be reproduced in whole or in part in any manner without the permission of the copyright owner. To inquire about licensing content, use the contact form at https://headlineusa.com/advertising.
Click Here To Comment
Facebook
Twitter
ReddIt
Email
Pinterest
Print
- Advertisement -
Previous articleTrump, Coulter and Dems Unite to Bash Departing DHS Sec. Nielsen
Next articleClinton Stooge Terry McAuliffe Makes a ‘Full Flop’ on Opposing Va. Infanticide

Apple Tells Taiwan Suppliers to Use ‘Made in China’ Label