'This action is in the best interest of the residents and students of Broward County and all citizens of Florida...' 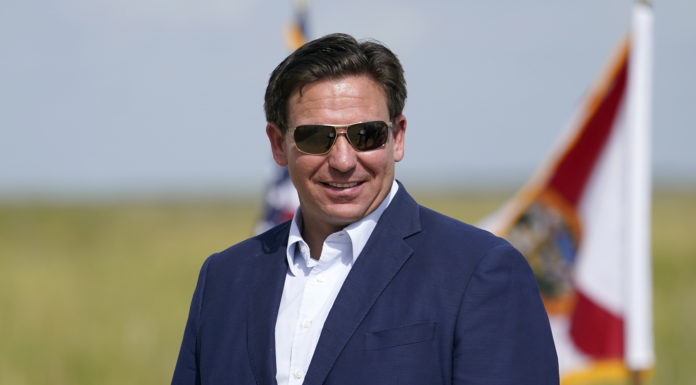 Gov. Ron DeSantis on Friday suspended via executive order four Broward County School Board members “due to their incompetence, neglect of duty, and misuse of authority.”

They were suspended after April 2021 recommendations proposed by the Twentieth Statewide Grand Jury weren’t implemented. The grand jury was impaneled by the Florida Supreme Court after the February 2018 Marjory Stoneman Douglas High School shooting in which a lone gunman shot 34 people, killing 17.

The grand jury’s final report found that a safety-related alarm could have possibly saved lives at the school but “was and is such a low priority that it remains uninstalled at multiple schools.” It also found that “students continue to be educated in unsafe, aging, decrepit, moldy buildings that were supposed to have been renovated years ago.”

The school board’s failure to address safety issues four years after the shooting, DeSantis said, is “inexcusable.” The school board members “have shown a pattern of emboldening unacceptable behavior, including fraud and mismanagement, across the district,” he said.

“It is my duty to suspend people from office when there is clear evidence of incompetence, neglect of duty, misfeasance or malfeasance,” DeSantis said in a statement. “The findings of the Statewide Grand Jury affirm the work of the Marjory Stoneman Douglas School Safety Commission.”

“We are grateful to the members of the jury who have dedicated countless hours to this mission and we hope this suspension brings the Parkland community another step towards justice,” he said. “This action is in the best interest of the residents and students of Broward County and all citizens of Florida.”

The grand jury was tasked with examining four issues, including whether public entities and school officials committed fraud and deceit by mismanaging funds devoted to school safety. In its final report, it found that the four board members mismanaged the SMART Program, a multimillion-dollar bond specifically solicited for school safety and renovation initiatives. It also reported that the board was aware of serious problems with the SMART Program, including former Superintendent Robert Runcie’s inability or unwillingness to manage those problems, yet didn’t take any action to fix it.

The grand jury recommended that all four school board members be suspended but they weren’t until DeSantis suspended them.

It also mentioned suspending a fifth school board member, Rosalind Osgood, who’s no longer on the board.

DeSantis appointed four new members to the Broward County School Board to replace those who were suspended.

They are Torey Alston, the former commissioner of the Broward County Board of County Commissioners and president of Indelible Solutions; Manual “Nandy” A. Serrano, a member of the Florida Sports Foundation Board of Directors, and CEO and founder of Clubhouse Private Wealth; Ryan Reiter, a U.S. Marine Corps veteran and director of Government Relations for Kaufman Lynn Construction; and Kevin Tynan, attorney with Richardson and Tynan, who previously served on the Broward County School Board and South Broward Hospital District.

Stand with Parkland president Tony Montalto issued a statement, saying, “We applaud the Governor’s action to follow the recommendation from Florida’s 20th Statewide Grand Jury and remove the Broward School Board members – citing their gross-negligence, misfeasance, malfeasance, and shear incompetence caused the mishandling of many of the aspects of the tragic date that took the lives so many at Marjory Stoneman Douglas.”

Broward County Public Schools is the sixth-largest school district in the U.S. and the second largest in Florida. It serves more than 256,000 students and about 110,000 adult students in 240 schools, centers and technical colleges, and 90 charter schools. It also supports a diverse population of students who speak 147 languages and whose backgrounds and nationalities represent 170 countries.

Copyright 2022. No part of this site may be reproduced in whole or in part in any manner without the permission of the copyright owner. To inquire about licensing content, use the contact form at https://headlineusa.com/advertising.
Click Here To Comment
Facebook
Twitter
ReddIt
Email
Pinterest
Print
- Advertisement -
Previous articleGOP Lawmakers Concerned Biden Is Using Taxpayer-Funded Trains to Transport Illegal Aliens
Next articleGov. Abbott Accelerates Busing of Immigrants from Southern Border to New York City

Poll: 79% of Americans Dissatisfied with the Direction of the Country

CNN Accuses GOP Candidate of Having ‘Ties to White Nationalists’

Moody Warns Potential Looters of Consequences During State of Emergency