Newspaper 'has been informed what is necessary to unlock their account...' 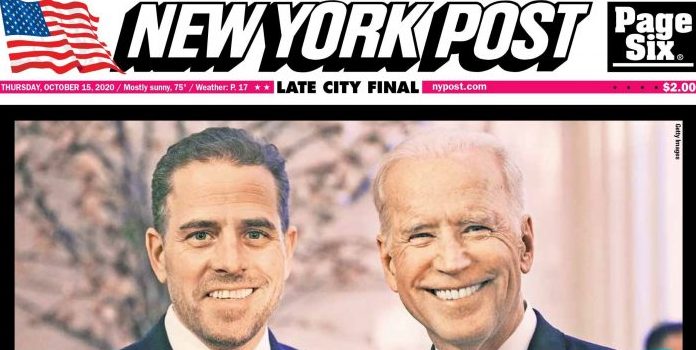 It has been five days since Twitter censored the New York Post‘s account because of its reporting on Joe Biden and Hunter Biden‘s criminal influence-for-cash enterprise with China and Ukraine, The Epoch Times reported.

Post editor Sohrab Ahmari confirmed the censorship, and politics editor Emma-Jo Morris said Twitter will not reinstate the account of the nearly 220-year old newspaper, which Alexander Hamilton founded, “unless we self-censor.”

The Post published information from Hunter Biden’s laptop hard drive and emails, which indicate he sold access to his father, who served as the Obama administration’s leader of Ukraine policy.

Democratic presidential nominee Joe Biden has accused the Post of a “smear campaign,” but his campaign has not denied the substance of the allegations.

It’s now been four days since The Post dropped the first Hunter Files story, and neither Joe nor Hunter has disputed a single material fact.

The easiest thing they could do is to say, “That laptop isn’t ours, Hunter didn’t send/receive those e-mails.”

Yet they haven’t done that

Twitter has blocked links to the Post‘s story, too, ensuring that voters will decide the 2020 presidential election without the Biden information unless they see it somewhere else.

Twitter justified its censorship by claiming the emails violated the platform’s rules against hacked materials, despite failing to take any actions against the illegally obtained tax records of President Donald Trump.

The Post said the information on Hunter’s laptop was not hacked.

“Information in the reports came from data extracted from a MacBook Pro laptop that a Delaware repair shop owner has said was dropped off in April 2019 but never picked up,” the Post reported.

(Headline USA) Federal prosecutors, who initially said there was "strong evidence" that the people who entered the Capitol last week aimed to "capture and...
Read more
POLITICS

The embattled National Rifle Association announced its plan to exit New York and reincorporate in Texas, where it will see greater support and be...
Read more
POLITICS

After a video emerged of a passenger owning Sen. Mitt Romney in an awkward airport confrontation, Delta pushed back, punishing the passenger by putting...
Read more

The embattled National Rifle Association announced its plan to exit New York and reincorporate in Texas, where it will see greater support and be...

After a video emerged of a passenger owning Sen. Mitt Romney in an awkward airport confrontation, Delta pushed back, punishing the passenger by putting...

(Headline USA) Transgender athletes are eagerly awaiting next week's transition of power as they seek to participate in high school and college sports, flouting...

(Headline USA) House Speaker Nancy Pelosi offered no clues Friday on her plans to send President Donald Trump’s impeachment to the Senate for trial, but...
- Advertisement -