'Glenn’s race was a blueprint of how to use common sense policies to win the trust of swing voters, and we need to replicate his win... ' 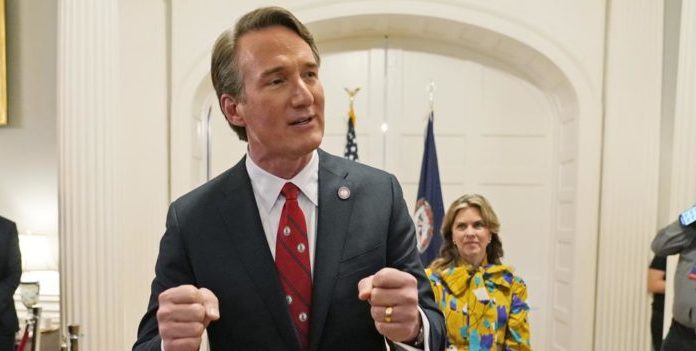 Preparing to compete on the national stage, Youngkin is launching two news groups.

“One is a nonprofit, tax-exempt organization called ‘America’s Spirit’ that isn’t required to disclose donors but will have rules in place for how it spends its cash,” according to the Daily Mail.

The other is a traditional political action committee called ‘Spirit of Virginia,’ which Youngkin will presumably be using to garner funds for gubernatorial elections across the country

An advisor to Youngkin’s committee said the governor is setting up to help other Republicans “flip blue states to red.”

“He is excited to grow that movement and keep the momentum going to help others win, especially those who will flip blue states to red, just as he did in Virginia last year.”

Youngkin has not made any announcements regarding a potential run, but expanding his support base would be a natural next step for an aspiring president.

There has also been no clear indication which elections Youngkin intends to get involved with.

A report from Politico states that there are 36 states holding elections for governor this year, and sixteen of those feature Democrat incumbents.

“It’s great to see Gov. Youngkin take action to support Republicans at the national level. Glenn’s race was a blueprint of how to use common sense policies to win the trust of swing voters, and we need to replicate his win,” said Nebraska Gov. Pete Ricketts in a statement.

Copyright 2023. No part of this site may be reproduced in whole or in part in any manner without the permission of the copyright owner. To inquire about licensing content, use the contact form at https://headlineusa.com/advertising.
Click Here To Comment
Facebook
Twitter
ReddIt
Email
Pinterest
Print
- Advertisement -
Previous article
Fla. Dems Shriek, Chant Songs in Desperate Bid to Derail Disney Taxation
Next article
Kentucky Abortion Law Blocked in Win for Unborn-Baby Killers
- Advertisement -

Pence Takes Responsibility for Classified Documents Found in his Home