‘I do not think the president of the United States has absolute access to media….’ 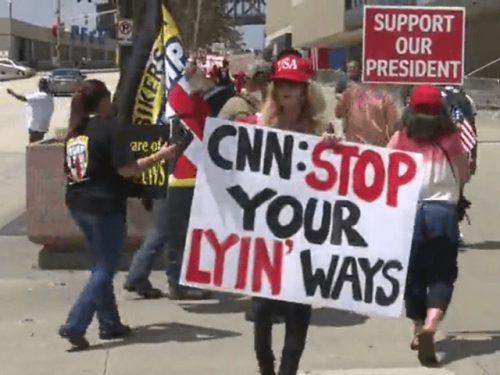 (Ben Sellers, Liberty Headlines) To see President Donald Trump this week delving into so heady an issue as Medicare reform, not over Twitter, but in the op-ed section of a mainstream newspaper, may have been a shock for some.

As Trump has felt the impacts of a cultural momentum shift from his thriving economy and political victories, one might argue that he is trying to recast himself in a more presidential light.

For any political figure whose ideas fell in lockstep with the leftist media, it likely would have been splashed across front pages as another high-water mark in an ever-growing acceptance of his mantle as party leader.

Instead, CNN reframed the debate by castigating USA Today for daring to normalize the president’s platform.

It claimed fact checkers dispatched to dismantle his argument “immediately identified a number of whoppers in the piece, while various members of the media questioned the newspaper’s decision to run it at all.”

It quoted former New York Times editorial page editor Andrew Rosenthal, who said snidely, “I think the idea that every word the president utters has inherent news value is a trap. Just because the president says it, that doesn’t make it news. … I do not think the president of the United States has absolute access to media.”

USA Today‘s Bill Sternberg defended the decision, saying Trump was held to the same standard as anyone else.

Sternberg said his paper “provides a forum for a diversity of views on issues of national relevance. We see ourselves as America’s conversation center, presenting our readers with voices from the right, left and middle.”

However, the anti-Trump sentiment in CNN’s hit-piece was echoed by sources from The Boston Globe and The Washington Post.

How can @usatoday allow Trump tp publish an article with documented falsehoods? https://t.co/akDAGCWoRN via @usatoday

At a moment when the Democratic Party finds itself becoming increasingly radicalized and unhinged political by Trump’s successes, the nation’s leading newspapers have followed suit, redefining their own standards and demonstrating on countless occasions their bad faith in presenting evenhanded coverage of the Trump administration.

The New York Times began tossing out its rulebook even before the election. As Trump’s voter appeal became evident, far-left columnist and talking-point driver Paul Krugman was one of the first to issue the clarion call that objectivity need no longer apply. “If Donald Trump becomes president, the news media will bear a large share of the blame,” he wrote in his Sept. 26 2016 column “The Falsity of False Equivalence.”

Krugman continued: “[T]hey have treated more or less innocuous Clintonisms as major scandals while whitewashing Trump. … [T]he problem hasn’t just been the normalization of Trump, it has been the abnormalization of Clinton.”

But if the underlying guilt Krugman pinned on his newsroom colleagues for Clinton’s downfall weren’t enough, the validation they received from Times Executive Editor Dean Baquet did the trick.

Baquet claimed to be facing a dilemma: His fiercely liberal readership base was complaining that the paper was being too fair to Trump in hesitating to call him out on falsities that it deemed endemic only to his particular worldview.

“He lies about small stuff. He says one thing one day and says something different the next day. He insists that things are true that are sort of demonstrably wrong,” Baquet said.

Shortly after the election, Baquet declared that The Times, having blown it in the lead-up to the election, planned to rededicate itself to the task of holding the president accountable.

Meanwhile, the rest of the media reinforced and justified biased coverage within its own “echo chamber“—a phrase made popular by Obama’s deputy national security adviser Ben Rhodes (who happens to be the brother of CBS President David Rhodes) to describe the spin cycle of selective leaking used to build the flimsy case for an Iran denuclearization agreement and the media’s obsequious acceptance of it.

In April 2016, The Boston Globe cast out the very first tenet of the journalism code of ethics—“seek the truth and report it”—by running a fake anti-Trump front page. Thus, it came as no surprise when Globe op-ed editor Marjorie Pritchard spearheaded an initiative by around 350 newspaper opinion sections to run editorials criticizing the president over his adversarial relationship with journalists. As many pointed out, the spectacle sort of proved Trump’s point.

The liberal flagship newspapers have continued to redouble efforts to rationalize their one-sidedness. The Times, for example, dismissed criticism for bringing onto its editorial board Sarah Jeong, who had repeatedly made overtly racist comments directed at white people over social media.

And although journalists have regularly relied on anonymous sources to report on the Trump administration, The Times pushed its standard even farther by allowing an anonymous op-ed from someone claiming to be a senior official who was part of the Trump “resistance.”

Because of the media’s own credibility crisis, the American public seems less swayed with every challenge it issues over Trump’s ‘truthiness.’ On Tuesday, the Los Angeles Times reported that most simply dismiss Trump as venting when he criticizes the media as being “enemies of the people.”

But by painting their own extremism as a counterbalance to Trump’s alleged hyperboles, the self-inflicted damage that the media has done on itself poses the greatest danger to democracy, subverting the entire fact-gathering process of the Fourth Estate into an agenda-driven war of attrition that it is unlikely to win.

N.Y. Most Restrictive in U.S. on Citizen Political Engagement