Rittenhouse Acquitted of All Charges, Justice Prevails Over Mob Rule

A jury has acquitted Kyle Rittenhouse of all charges with a unanimous verdict after almost four days of deliberations, siding with the defense’s pleading of self-defense and bringing to end a contentious trial that stemmed from riots that erupted in Kenosha, Wisconsin, last summer.

Rittenhouse, 18, would have faced a mandatory life sentence if found guilty and convicted of first-degree intentional homicide.

The verdict of not guilty sparked an outpouring of support on Twitter for Rittenhouse, and the rejection of mob rule in the favor of letting the legal system work for justice.

Kyle Rittenhouse ACQUITTED on ALL charges!

May Kyle and his family now live in peace.

Those who help, protect, and defend are the good guys.

Kyle is one of good ones.

The next time Kyle is in court I pray it’s to sue the hell out of a LOT of people.

Justice! Rittenhouse Not Guilty on all counts.

After the verdict was announced, Gov. Tony Evers publicly called for calm, even as he placed 500 National Guard members on standby in Kenosha if needed. Local law enforcement, protestors and a herd of media were already beginning to assemble around the courthouse. 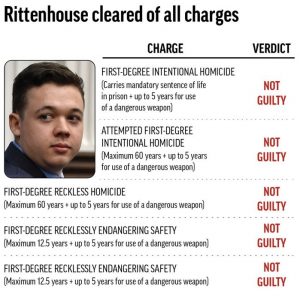 Rittenhouse had been grossly overcharged with homicide, attempted homicide and reckless endangerment after fatally shooting two rioters and wounding a third. The judge in the case had already tossed one charge of possession of a dangerous weapon.

Rittenhouse had gone to Kenosha to help protect residents and property owners from vandalism and looting that spread rampant during the riots, which erupted over the police shooting of Jacob Blake, a black man, by a white Kenosha police officer.

Rittenhouse’s attorneys argued that he acted in self-defense after being chased and attacked from behind by rioters.

Cheers outside the Kenosha County Courthouse after Kyle Rittenhouse is found not guilty. pic.twitter.com/LhQQSRrgiF

(Headline USA) An officially-authorized, state-sanctioned capitulation to criminal-loving leftists has dropped in New York City, where safe havens for people to use heroin and...
Read more

(Headline USA) An officially-authorized, state-sanctioned capitulation to criminal-loving leftists has dropped in New York City, where safe havens for people to use heroin and...

(Headline USA) A suburban Detroit office of Democrat U.S. Rep. Debbie Dingell has been broken into and ransacked, with memorabilia belonging to her late...

(Headline USA) Already antsy about newest coronavirus variant, Wall Street's losses deepened on Tuesday after the head of the Federal Reserve said it will...

A Democrat senator threatened this week that there will be a “revolution” if the Supreme Court overturns Roe v. Wade. Sen. Jeanne Shaheen, D-N.H., said...

A self-serving, progressive biography of Alexandria Ocasio--Cortez, titled, Take Up Space: The Unprecedented AOC is due out in February according to the Blaze. “Some of...

DeSantis Vows No Lockdowns in Fla., Regardless of Biden’s Future COVID Flip-Flops

Florida's Republican Gov. Ron DeSantis said that locking down the state is not an option in combating COVID as leaders around the world struggle...
- Advertisement -