There are very good reasons to own physical metal even when it feels like you are being punished for doing the right thing...

After nearly 50 years, it is safe to say their strategy was a success.

It is often excruciating to own metal when the short run price action is completely disconnected from fundamentals.

The price smash in the last couple trading days is a case in point.

Nobody can make a coherent fundamental case for the move lower. It is best to simply remember there are very good reasons to own physical metal even when it feels like you are being punished for doing the right thing.

The Federal Reserve and Wall Street bankers want you to buy stocks and bonds. Their fingers are always on the scale.

That is why the equity markets are at all-time highs, despite extraordinary amounts of uncertainty and rising dependence on artificial government stimulus.

Wall Street banks have at times operated as criminal enterprises. The Fed and other regulators enable them to rig markets by making sure very little is investigated. Where fraud is proven, they make sure the punishment never fits the crime.

These people blow the bubbles. When the bubbles pop, they bail themselves out with taxpayer money and leave the rest of America holding the bag.

They didn’t apologize in 2008, and they won’t apologize when the next financial crisis wipes trillions of dollars of value from investors’ net worth.

The banking cabal does not have Americans’ best interests at heart, which is reason in and of itself to reject their advice and buy metal.

There are, of course, other good reasons. Gold and silver are assets which are guaranteed to be valuable tomorrow, next year, and next decade. This will be true regardless of what happens in the world. 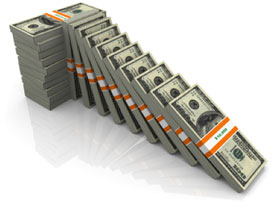 There are VERY few assets with a track record as a store of value which stretches back thousands of years.

Another reason is that paper money always dies. The U.S. dollar’s reign as world reserve currency is long in the tooth, and the greenback looks set to lose its privileged status in the years ahead.

Sound incredible? We understand. The dollar is one of the most basic institutions in America and it is hard to imagine life without it.

Yet the case is simple.

Consider just two truths. The dollar is no longer backed by anything but confidence – the belief that a dollar accepted by one person today will be accepted by someone else tomorrow.

The other truth is this confidence is failing. People are waking up to a grim reality. Confidence in the federal government and the dollar is in rapid decline.

Here is something else to consider. Coins, rounds, and bars are private, portable, and off the grid.

It is possible to put a million dollars’ worth of gold coins into a suitcase and travel anywhere in the world.

When you arrive, those coins can quickly and easily be converted into the local currency. You don’t need permission, you don’t need the banking system and, if properly done, bureaucrats can’t stop you.

Another good reason to own metal is the lack of counterparty risk. Recent developments here in the U.S. highlight just how important and rare it is to find an asset whose value is independent of all third parties.

Althrough it is not portable or liquid, real estate is another great tangible asset with a long history as a store of value. However, investment property owners rely on tenants to pay rent and government to enforce contracts.

The Centers for Disease Control, of all agencies, has unilaterally claimed the authority to impose a moratorium on evictions. Unelected health officials with no statutory authority whatsoever are forbidding property owners from kicking out tenants who can’t (or won’t) pay rent.

Should the U.S. drift further into collectivism, it is easy to imagine a punitive “wealth” tax on property owners, or private property being confiscated outright by governments.

Lastly, it is important to note that precious metals do perform well over the long term, even if it often doesn’t feel that way in the short term.

Gold has outperformed stocks over the past two decades. Anyone buying and holding is doing just fine.

So take heart when precious metals prices fall. Remember why you bought gold and silver in the first place. There are bigger and more important reasons to own them than whether prices move higher or lower in the days ahead…Original Source…

Copyright 2022. No part of this site may be reproduced in whole or in part in any manner without the permission of the copyright owner. To inquire about licensing content, use the contact form at https://headlineusa.com/advertising.
Click Here To Comment
Facebook
Twitter
ReddIt
Email
Pinterest
Print
- Advertisement -
Previous articleJUDGE: Norwegian Cruise Lines Can Force Passengers in Fla. to Be Vaxxed
Next articleOregon Ballot Measure Criminalizes Hunting, Livestock Slaughter…and Pest Control

AOC Attempting to Set Up Impeachment for Clarence Thomas

Philadelphia Mayor Says Only Cops Should Have Guns