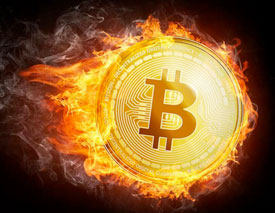 (Associated Press) The Biden administration is taking steps to ensure Americans who pay for goods or services with cryptocurrencies don’t sidestep the tax man.

The Treasury Department issued a report Thursday that outlines measures.

Among the proposed changes, businesses that receive “cryptoassets” with a fair market value of more than $10,000 would have to report it to the IRS.

That’s something businesses already have to do when with cash transactions of $10,000 or more.

The report explains that while the share of business transactions that involve cryptocurrency remains small, the new reporting requirement is necessary to discourage businesses from concealing such transactions from the IRS in the future.

Another policy change would require payment-services providers to file Form 1099 reports in order to discourage businesses from attempting to hide their income by using alternatives to traditional banks.

Digital currencies were holding on to gains late Thursday after the release of the Treasury Department report.

The price of Bitcoin was up 2.5% to roughly $40,401, according to the online brokerage Coinbase.

The Biden administration wants to spend millions of taxpayer dollars to pay federal lawyers to represent illegal immigrants seeking asylum in the U.S. According to...
Read more
EXCLUSIVE

The Marxist "Squad" sent a letter to Treasury Secretary Janet Yellen to request that her department review and revoke non-profit status from pro-Israel groups,...

Citing satellite photos, unusual funding requests and the deletion of an online database by China’s Wuhan Institute of Virology amongst other circumstantial evidence, the...

(Bethany Blankley, The Center Square) The Texas border city of Laredo has sued the Biden administration, hoping to halt its policy of transferring several hundred...

(Headline USA) An Illinois tax agency has ruled that former President Donald Trump is due a $1 million refund on the 2011 tax bill...

(Headline USA) China and India have missed a U.N. deadline to submit fresh plans for cutting their carbon dioxide emissions in time for the...

(Headline USA) Anger and frustration mounted in Congress over the weekend as a nationwide eviction moratorium expired. One Democratic lawmaker even camped outside the Capitol...
- Advertisement -