‘Any difficulty and we will assume control but, when the looting starts, the shooting starts…’

(Claire Russel, Liberty Headlines) One day after President Trump introduced an executive order that would hold Twitter and other Big Tech companies accountable for censorship, the social media giant added a warning label to one of President Trump’s tweets early Friday morning.

The company accused Trump of “glorifying violence” by warning that violence in Minneapolis would lead to even more violence.

I can’t stand back & watch this happen to a great American City, Minneapolis. A total lack of leadership. Either the very weak Radical Left Mayor, Jacob Frey, get his act together and bring the City under control, or I will send in the National Guard & get the job done right…..

“These THUGS are dishonoring the memory of George Floyd, and I won’t let this happen. Just spoke to Governor Tim Walz and told him that the Military is with him all the way. Any difficulty and we will assume control but, when the looting starts, the shooting starts. Thank you,” Trump tweeted. 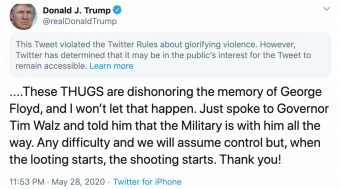 Twitter did not take the post down, though, adding that it is in the public’s interest that the tweet remain accessible, since it is timely and relevant.

However, the company warned that the “historical context of the last line” and its “connection to violence” could “inspire similar actions today.”

In other words, Twitter is accusing the president of encouraging violence.

This restrictive disclaimer is a first for Twitter, which has also begun adding fact-check labels to tweets from Trump that Twitter deems false.

Trump responded with an executive order that would prevent Twitter and other notoriously left-leaning social media companies from enforcing a double standard against conservative views.

“In a country that has long cherished the freedom of expression, we cannot allow a limited number of online platforms to hand-pick the speech that Americans may access and convey online,” the executive order reads.

“This practice is fundamentally un-American and anti-democratic,” it says. “When large, powerful social media companies censor opinions with which they disagree, they exercise a dangerous power.”