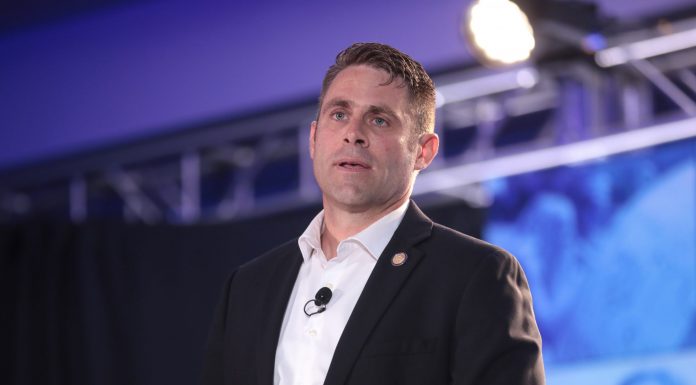 (Headline USA) Virginia Republicans have picked state Del. Nick Freitas as their candidate to face off against U.S. Rep. Abigail Spanberger this fall in one of the country’s marquee congressional races.

News outlets report Freitas won a convention Saturday to be the GOP nominee for a Richmond-area congressional district.

Freitas, defeated state Del. John McGuire and several other candidates in a hard-fought convention that took several hours and three rounds of voting before a winner was declared.

Freitas is a libertarian-leaning former Green Beret who is backed by U.S. Sen. Rand Paul.

He unsuccessfully sought the GOP nomination for the U.S. Senate in 2018 and had to mount a pricey write-in campaign to keep his state House seat last year after failing to get his campaign paperwork in on time to ensure his name was on the ballot.

He failed to get his paperwork in on time again this year for the congressional race, but a state elections board recently voted 2-1 to give him an extension.

Spanberger is a former CIA officer who is one of several radical freshmen Democrats who flipped districts won by President Donald Trump.

Copyright 2022. No part of this site may be reproduced in whole or in part in any manner without the permission of the copyright owner. To inquire about licensing content, use the contact form at https://headlineusa.com/advertising.
Click Here To Comment
Facebook
Twitter
ReddIt
Email
Pinterest
Print
- Advertisement -
Previous articlePortland Mayor Tells Trump to Remove DHS Agents from City
Next articleUS Appeals Court Overrules Texas GOP’s In-Person Convention
- Advertisement -
- Advertisement -

McCarthy Tells J6 Committee to Save its Records

Musk: Neuralink Is Ready to Insert Brain Implants into People

Wisc. Lawmaker Asks Why Military Ballot Voting Dropped over 80% in 2022

Is Michelle Obama Positioning Herself for a 2024 Run?