‘We are continually working to update and refine our customer experiences…’

(Ben Sellers, Liberty Headlines) An investigation by Liberty Headlines into the Microsoft-run search engine Bing revealed what appears to be a secret ban of the term “Trump” in the website’s shopping section.

The search specifically applied to the shopping tab and not to other areas of Bing searches, such as the News section.

However, it remained unclear whether Bing news searches or general searches of the president’s last name might also be impacted by algorithmic manipulations.

By comparison, searches for Trump’s Democratic rivals had plenty to choose from.

Socialist Sen. Bernie Sanders‘s disdain for all things corporate and commercial didn’t keep the filthy lucre from flowing on his T-shirt line. 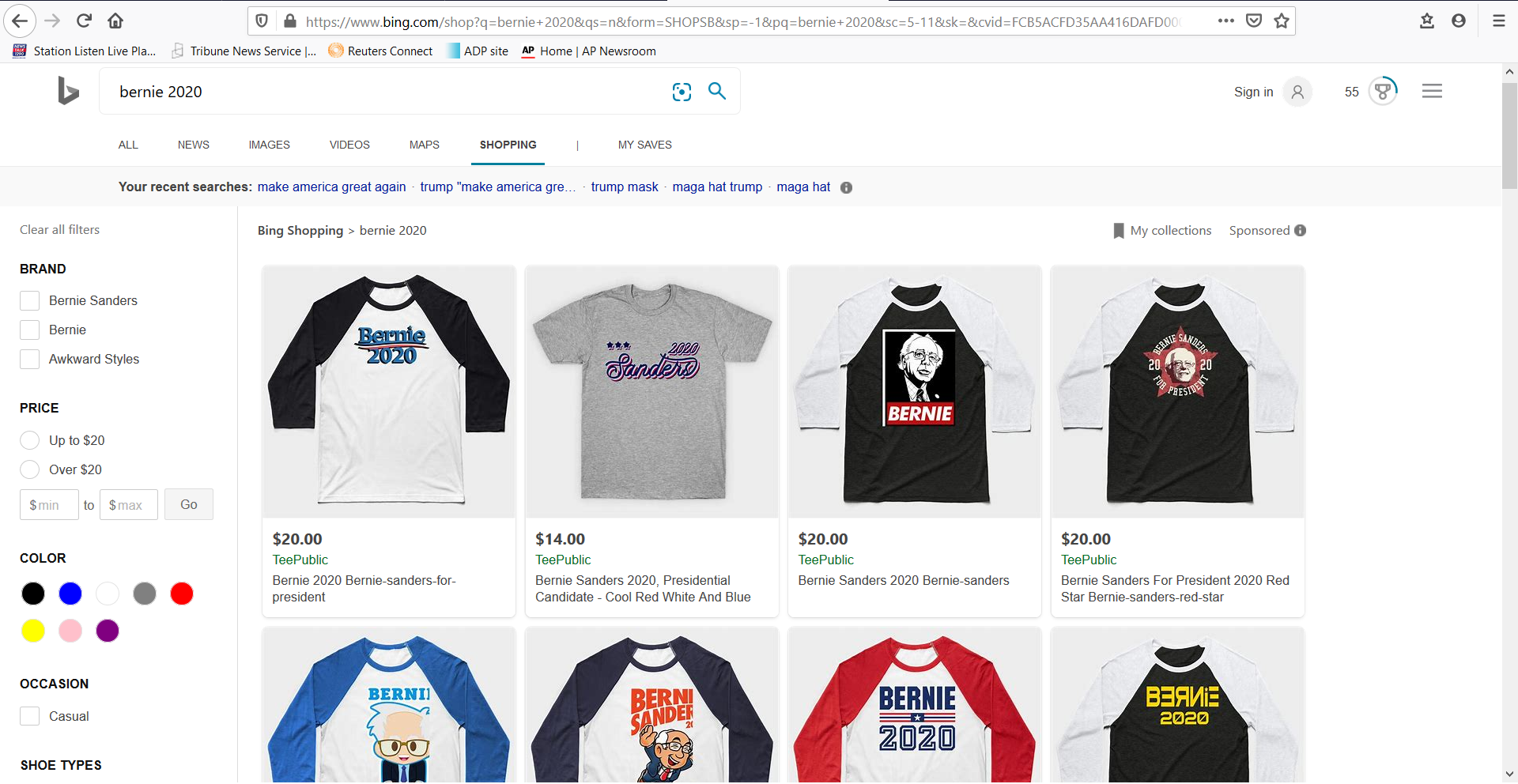 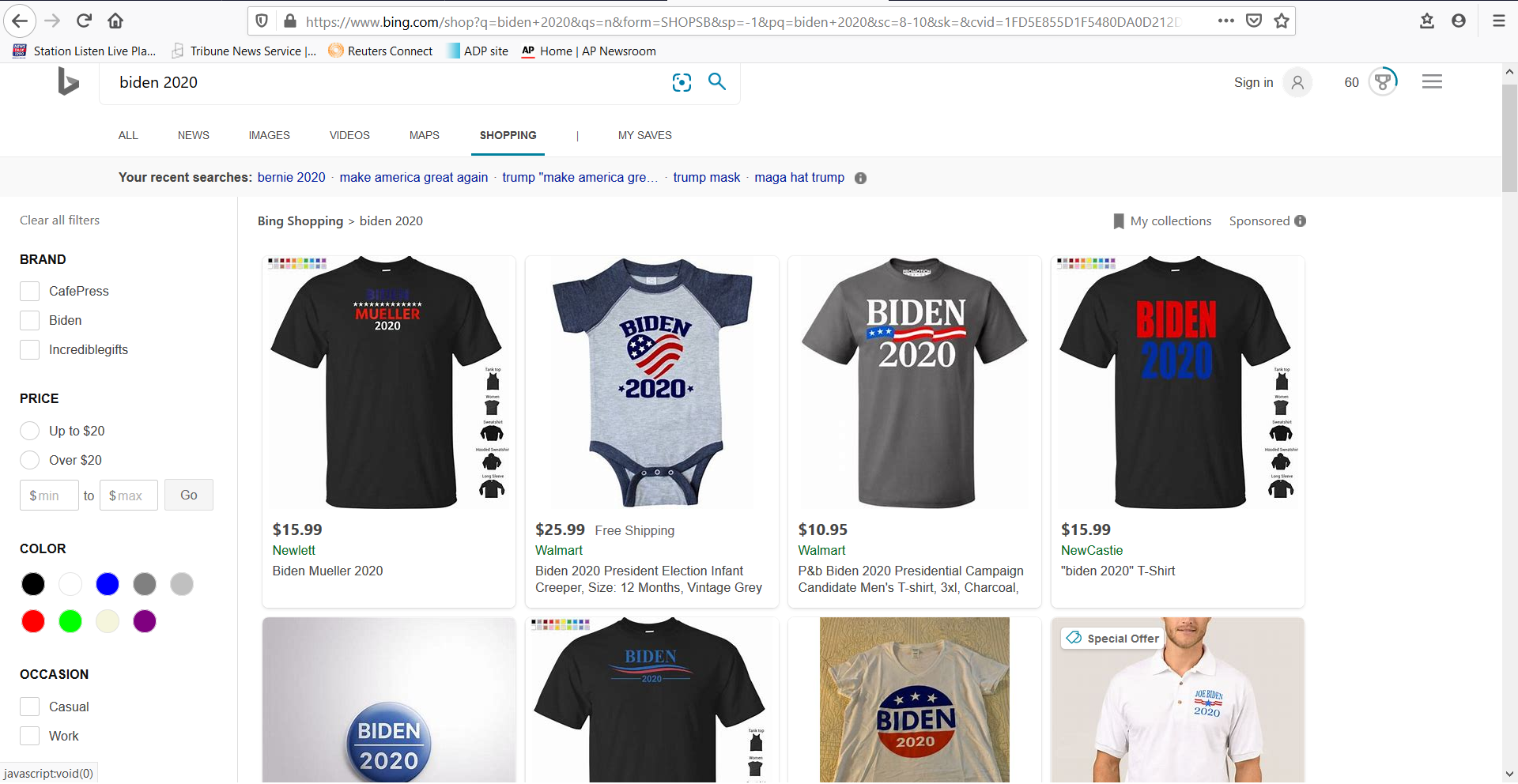 And new-age guru Marianne Williamson, who recently dropped out of the primary race, had several of her wares available at discount, but still in inventory. 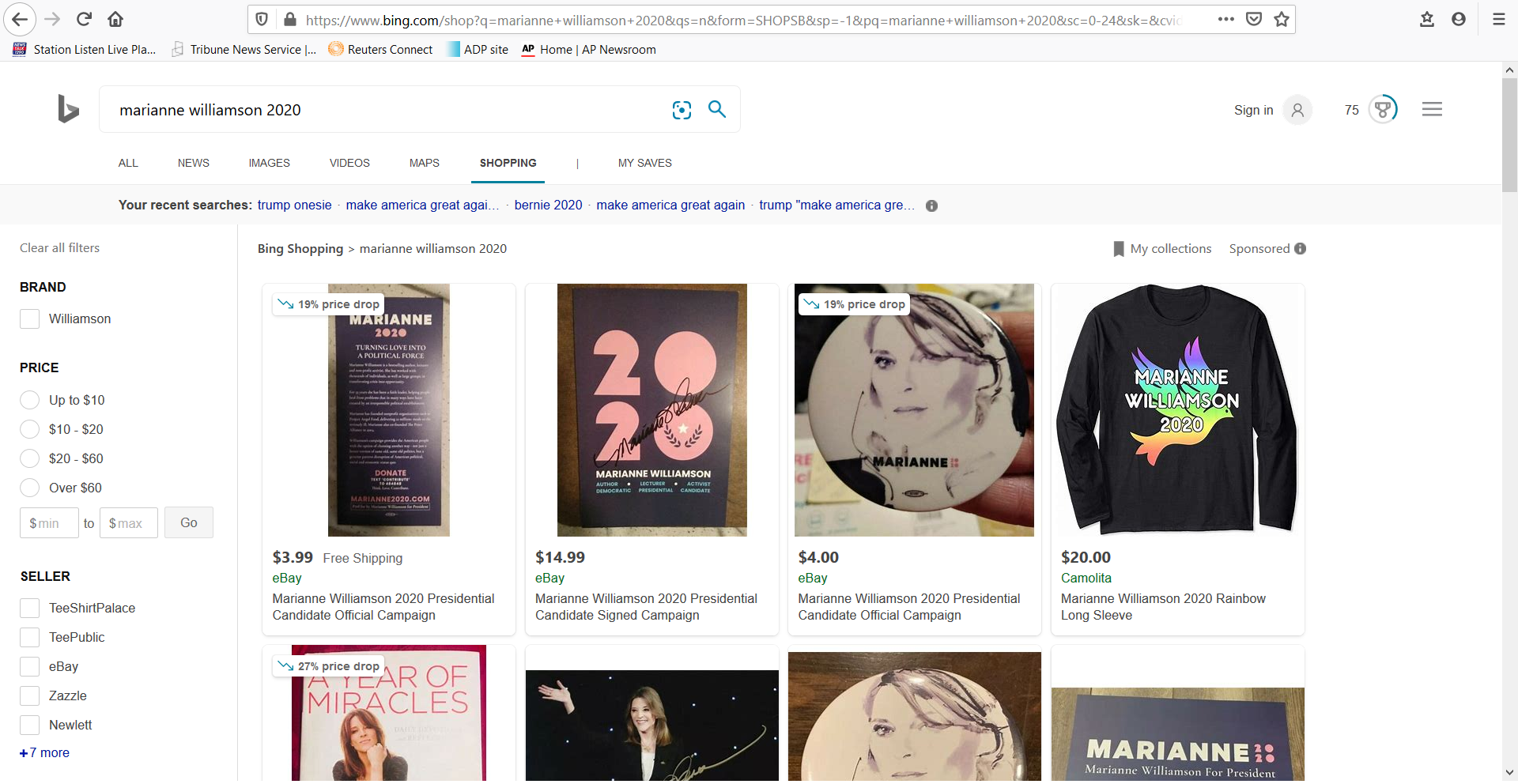 However, no such luck for those searching Bing for Trump-branded onesies…

Likewise, former comedian Kathy Griffin might have avoided her public disgrace if she had been using Bing to search for Trump masks.

Surely, though, the polarizing president’s politics would have no bearing on other family members … or would they?

First Lady Melania Trump has her own unique clothing and jewelry styles, and a Bing autocomplete showed that at least a few people had sought to know more about them.

But those efforts were to no avail.

While shocking, Bing’s Trump ban is not entirely unprecedented.

Several well-known tech companies, including search-engine rival Google, have come under severe scrutiny recently amid accusations that engineers had purposely written bias into the coding that would bury favorable coverage of Trump and give preference to left-leaning news sites.

Others allegations include the blacklisting or de-indexing of conservative sites, preventing them from appearing in searches or relegating them to deep within the bowels of the Internet.

Sites such as Twitter, Facebook and Youtube also have been accused of shadow-banning conservative content-creators, preventing their posts from appearing in the feeds of others, even though the users themselves will see them.

Still, no such issues have been previously reported for shopping-related searches, which generally aggregate the merchandise of other retailers with whom they have partnered. 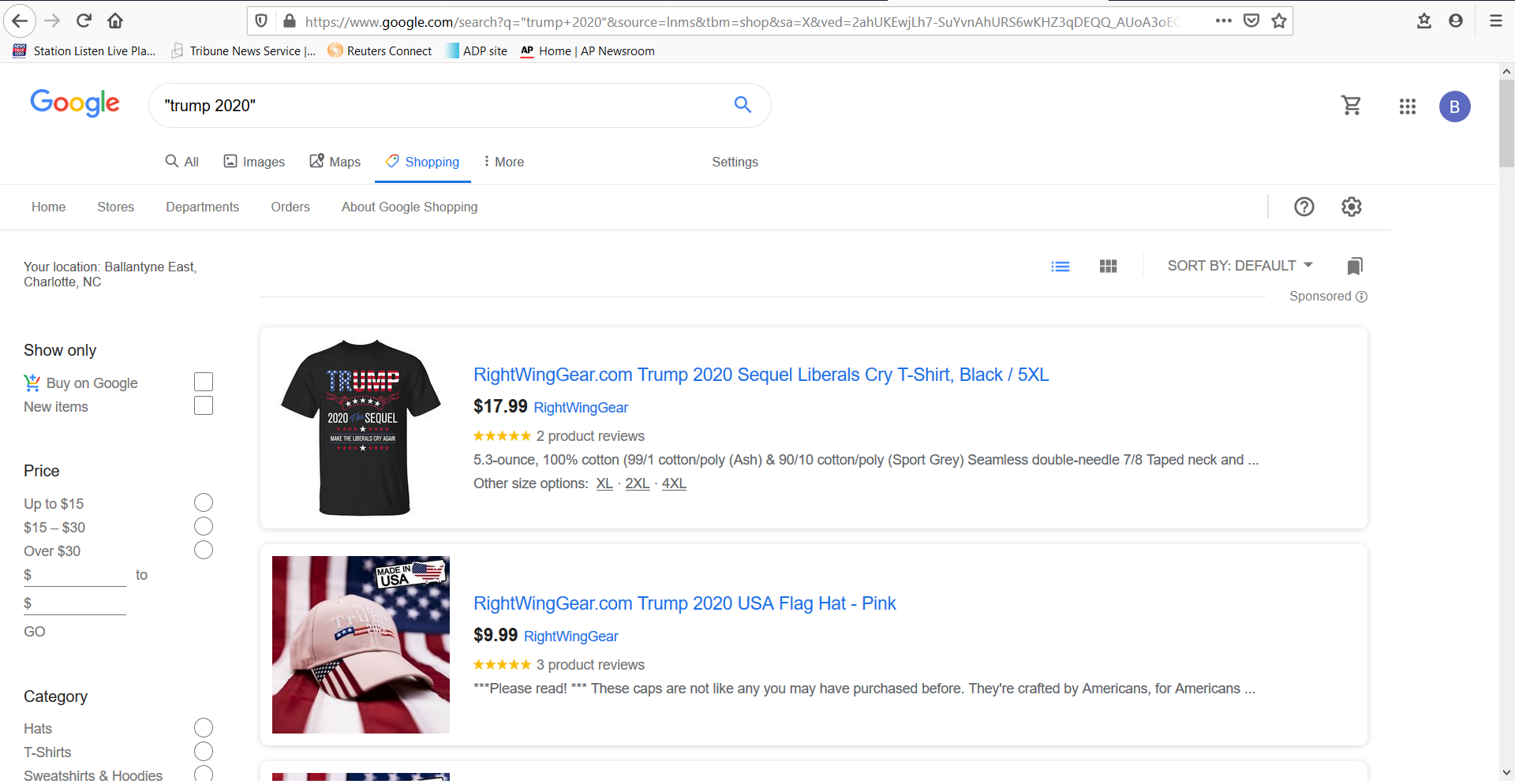 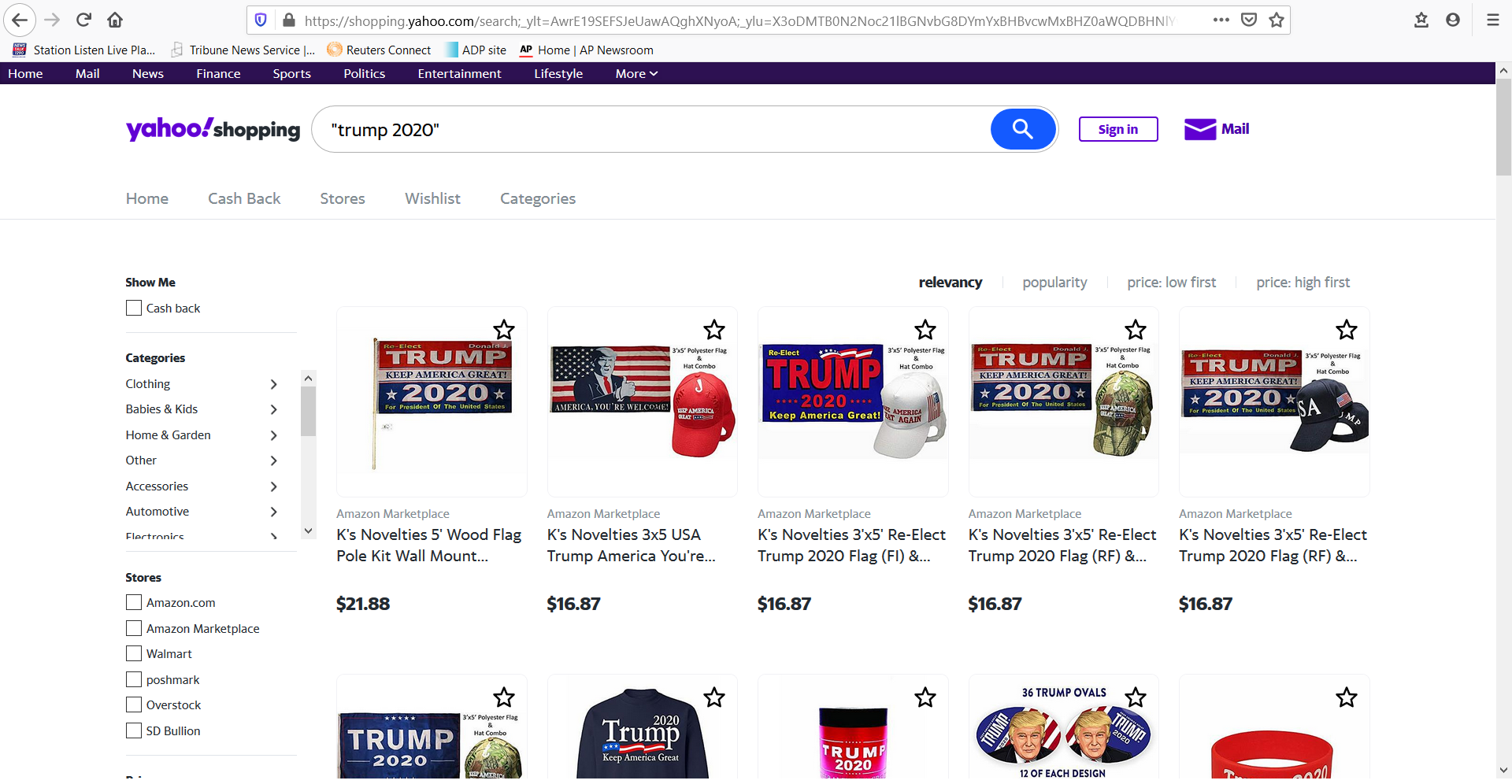 After discovering the unusual omission from Bing’s shopping site, Liberty Headlines reached out to Microsoft’s media representatives, WE Communications, for comment.

The Windows manufacturer offered the following reply, attributed to a Microsoft spokesperson:

“Our shopping results are from sellers participating in our shopping program that provide pricing and product information to Bing. We are continually working to update and refine our customer experiences, which includes providing the most relevant, accurate, and comprehensive information in our search results.”

The Bing site lists a wide array of partner sites, including leading online retailers like Ebay and Amazon.

However, going directly to the Amazon site, it was easy to find a plethora of Trump-emblazoned items. 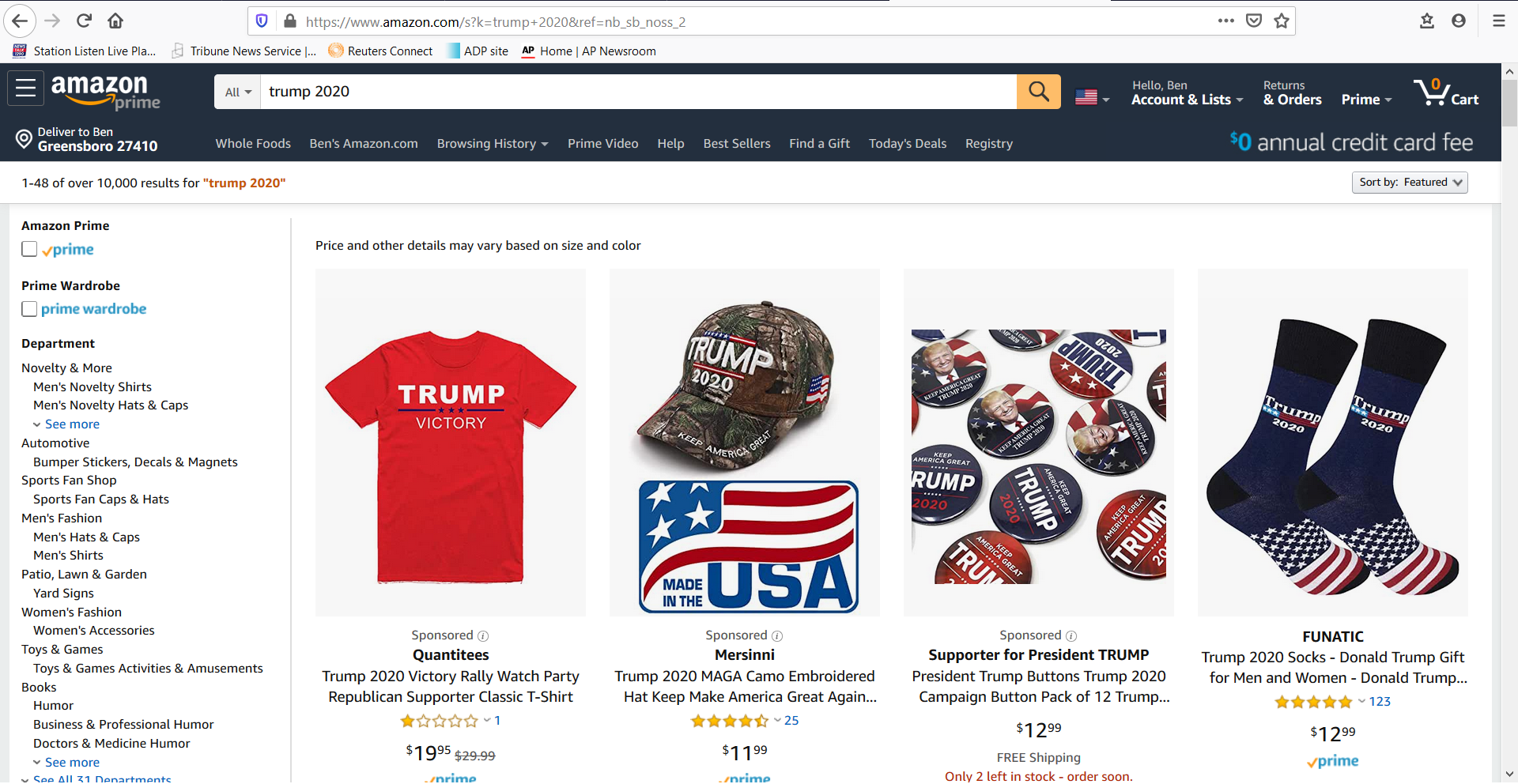 On the upside, the statement from the Microsoft spokesperson sounded a lot like they may soon seek to address the Trump ban, going straight to Bill Gates himself if necessary.

In the meantime, those who insist on using Bing (also the default engine for Internet Explorer and Cortana searches) can still get their gear —including those coveted Trump onesies.

They just have to get a little creative, using terms like “Make America Great Again” instead of the president’s last name. 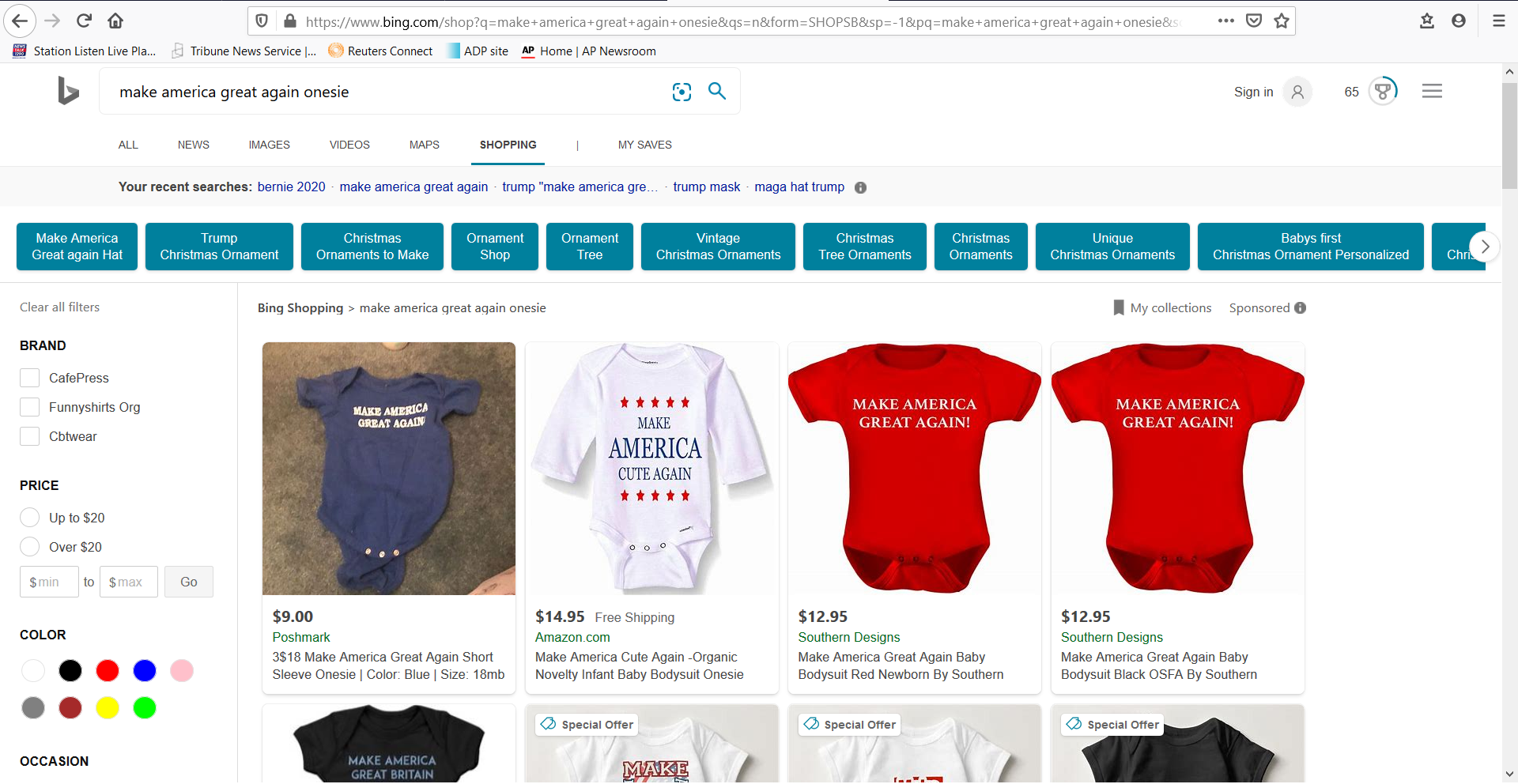 Copyright 2022. No part of this site may be reproduced in whole or in part in any manner without the permission of the copyright owner. To inquire about licensing content, use the contact form at https://headlineusa.com/advertising.
Click Here To Comment
Facebook
Twitter
ReddIt
Email
Pinterest
Print
- Advertisement -
Previous articleJordan, Meadows Demand FISA Court Explain Why Obama Hack Will Oversee Reforms
Next articleMinnesota ‘Teacher of the Year’ Knelt During National Anthem to Protest Trump
- Advertisement -
- Advertisement -