'The kids started crying and screaming and I jumped out of the car after I was peppered [sic] sprayed...' 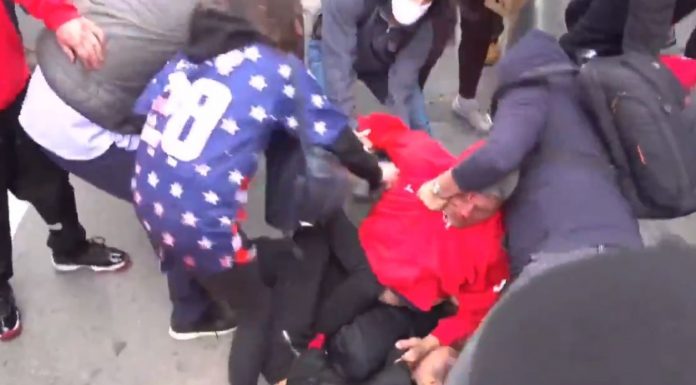 (Headline USA) Antifa activists attacked a Jews For Trump convoy of hundreds of cars draped with American flags and Trump 2020 banners rolled slowly through Manhattan and Brooklyn on Sunday afternoon.

The caravan traveled from Coney Island to the Trump Tower in Manhattan before heading to a rally in a Brooklyn park.

According to Fox News, a family of seven was pepper-sprayed by the rioters.

“Immediately the kids started crying and screaming and I jumped out of the car after I was peppered [sic] sprayed as well,” another participant in the parade said said.

Woman arrested for spraying pepper spray at the #JewsForTrump vehicle convoy on 5 Avenue in Manhattan. pic.twitter.com/kfrwaLTJgT

Another video showed a small group of people throwing objects from a Brooklyn highway overpass at vehicles bedecked with Trump flags.

The Post Millenial reported that rioters burst through a police barricade.

Antifa/BLM is vandalizing Jews for Trump vehicles with red paint in NYC and attacking the drivers. pic.twitter.com/vBUkqvZXF0

According to the Jews For Trump website, Sunday’s rally was intended to show solidarity with “the beleaguered Red Zone community,” a reference to the coronavirus hot spots designated by New York Gov. Andrew Cuomo as areas where schools and nonessential businesses must close to prevent the spread of the coronavirus.

The rally follows weeks of tensions in Brooklyn’s Orthodox Jewish neighborhoods over the coronavirus restrictions.

Heshy Tischler, a City Council candidate and leader of Brooklyn protests against the restrictions, promoted Sunday’s car parade on Twitter.

Boris Epshteyn, an adviser to the Trump campaign and co-chair of Jewish Voices for Trump, organized Sunday’s rally in Brooklyn’s Marine Park at the end of the car parade.

Material from Associated Press was used in this report.

Copyright 2022. No part of this site may be reproduced in whole or in part in any manner without the permission of the copyright owner. To inquire about licensing content, use the contact form at https://headlineusa.com/advertising.
Click Here To Comment
Facebook
Twitter
ReddIt
Email
Pinterest
Print
- Advertisement -
Previous articleEnergetic Trump ADDS to Travel Schedule; Biden Works from Home
Next articleMan Charged in Burning of Ballot Drop Box in Boston